MAJOR PRODUCTS AND TECHNOLOGIES REVEALED AT THE EXPOSITION
Many new technologies and  commercial products made their debut at the World Columbian Exposition. Some of these include:

CRACKER JACK POPCORN
Frederick William Rueckheim, a German immigrant, and his brother Louis were first to add peanuts to molasses -flavored candy-coated popcorn to create Cracker Jack. Cracker Jack was introduced to the world at the World’s Fair of 1893 and was a great success. Legend has it that the name "Cracker Jack" came from a customer who upon trying the treat exclaimed "That really a cracker - Jack!" By 1896, the company devised a way to keep the popcorn kernels separate, the mixture had been difficult to handle because it tended to stick together in chunks. (Bellis, M. (n.d.)). Cracker Jack has since become a much loved baseball snack.

AUNT JEMIMA PANCAKE MIX
Aunt Jemima Pancake Mix was created by Chris Rutt, a reporter from St. Joseph Missouri, who loved pancakes but didn’t like to prepare them from scratch every day. In 1889, he developed a pre-mixed pancake mix and began putting them on grocer’s shelves.
Chris L. Rutt and Charles G. Underwood bought the Pearl Milling Company in 1889 and started producing ready-mixed pancake flour on a large scale.
In 1890, Chris Rutt and Charles Underwood went bankrupt and sold their formula to R.T. Davis Milling Company. The company hired Nancy Green, an African-American cook to symbolize the product. Nancy Green demonstrated how to use the pre-mix at the fair and was nicknamed ‘Pancake Queen’ by officials.

T H E    Z I P P E R
Even though the zipper as it is today was perfected by Gideon Sundback, a Swedish- American engineer, it invented by Whitcomb L. Judson.  In 1893, Judson exhibited his new invention at the Chicago World’s Fair as the Clasp Locker’. There were many inventors that took part in creating their own version of the zipper, but Mr. Whitcomb Judson was the man who displayed the zipper at the Chicago World's Fair.   Judson’s invention was not a big commercial success until it was improved by Gideon Sundback in 1913. 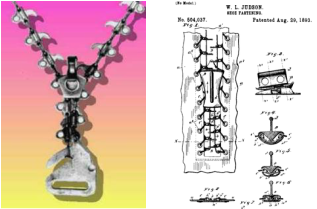 Whitcomb Judson's clasp locker and Patent of Judson's improved 'clasp-locker' fastener, 1893
FERRIS WHEEL
Paris, France held its World’s Fair in 1889 to mark the 100th anniversary of the French revolution. The Eiffel Tower was built to serve as the entrance. The organizers of the World’s Columbian Exposition were determined to build something that could outshine the Eiffel Tower. Earlier in the planning for the fair, organizers carried out a nationwide contest for ideas to build something monumental.
George W. Ferris, an engineer, submitted designs to be considered. His first three designs were rejected because fair organizers thought it would be dangerous both to fair-goers and builders as well. The original Ferris Wheel was supported by two 140 foot steel towers and a 45 foot axle. The wheel had a diameter of 250 feet, was 264 feet tall, and had 36 wooden carts.
The Ferris Wheel could fit 2,160 people at a time, and cost 50 cents to ride—twice the price of a ticket to the fair itself.
“Ferris’ gargantuan creation was not completed until six weeks after the fair opened, but like many aspects of this fair to end all fairs, it opened the world’s eyes to American prowess and ingenuity.” (Bolotin & Laing, 2002) 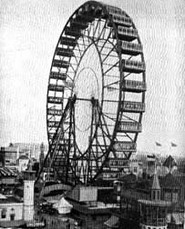 WRIGLEY’S CHEWING GUM
The Wrigley Company was founded by the Wrigley family on April 1, 1891. The company started out selling products like soap and baking soda. In 1892, as a marketing strategy, William Wrigley jr., began packaging chewing gum with the baking powder. With time, the chewing gum became more popular than the baking powder and the company reinvented itself to start producing chewing gum. Early flavors included Vassar, Sweet Sixteen, Peppermint, Lemon Cream, and Blood Orange. Juicy fruit and spearmint gums soon became the mass favorites. Juicy fruit Wrigley gum was first introduced to the nation at the World’s Columbian Exposition in 1893. 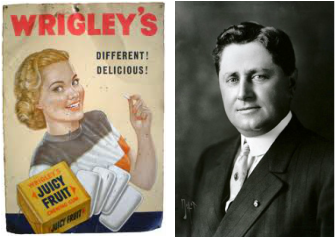 PABST BLUE RIBBON
Pabst Blue Ribbon beer originated from Milwaukee, Wisconsin in 1844. Run by partners Frederick Pabst and Philip Best, the brewery showcased the beer at the World’s Columbian exposition in 1893. Originally called Best Select, and then Pabst Select, the beer was named “America’s Best” at the fair. It is believed that the beer was renamed Pabst Blue Ribbon after winning that recognition at the fair. 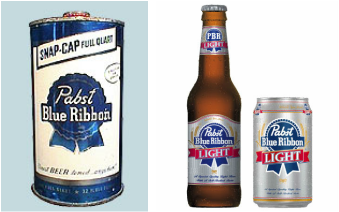 THE AUTOMATIC DISHWASHER
The first reliable (hand-powered) dishwasher was invented in 1887 by Josephine Cochrane.
It is believed Josephine Cochrane was a very rich woman and did not do dishes herself. But when she got frustrated with her servants chipping her fine China all the time, she decided to build a device that could do the dishes faster and without any chipping.
After Cochrane devised the machine her friends became interested and soon she was receiving orders to build more. She also received orders from hotels and restaurants all over. She subsequently patented the dishwasher and began production.
Josephine Cochrane exhibited her invention at the World’s Columbian Exposition. She won the highest prize for ‘best mechanical construction, durability and adaptation to its line of work.
Cochrane started the Garis-Cochran Manufacturing Company, which became part of KitchenAid. Grabianowski, E. (2006)

SPRAY PAINTING
While working under pressure to complete the construction of the World’s Columbian Exposition, a disagreement ensued between Chief of Construction Daniel Burnham and director of color William Pretyman. Pretyman resigned and he was replaced by Francis David Millet. Millet devised a way to paint the buildings that would take lesser time than a paint brush would. He invented a method where a mixture of oil and white lead could be applied using a hose and a special nozzle. (http://home.howstuffworks.com/spray-paint.htm)


ELECTRICITY
Electricity debuted at the 1876 World’s fair in Philadelphia, Pennsylvania. It was however not very welcomed and considered not very safe by the public. At the Columbian Exposition in Chicago, electricity was reintroduced to the public by promoting its uses.  Amusement parks and fairs were used to successfully promote the new technology because they were  presented in ‘fun’ way. http://www.sil.si.edu/silpublications/worlds-fairs/WF_selected.cfm?categories=World's%20Columbian%20Exhibition%2C%20Chicago%201893
In some instances, electricity was incorporated into water displays to create a stunning spectacle.

The international exposition at the fair was held in a building that had lots of electrical exhibits. Companies like General Electric and Westinghouse proposed to provide power for the electrical exhibits. General Electric, backed by Thomas Edison and J.P Morgan proposed to do the job for an exorbitant price but were declined by fair officials. In the end, Westinghouse won the bid and got the chance to showcase the Polyphase alternating current system created by Tesla/Westinghouse.  This system was made up of a switchboard, polyphase generators, step-up, transformers, transmission line, step-down transformers, commercial size induction motors and synchronous motors, and rotary direct current converters (including an operational railway motor). The result was a spectacular display of lights and energy, which illuminated the exposition. Vujovic L. & Vujovic M.(n.d) 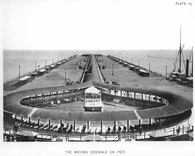 MOVING SIDE WALK
The first moving side walk was built for the World’s Columbian Exposition of 1893. It cost 5 cents to ride. Riders could stand or walk on the first platform, which traveled at about two miles per hour, or step up onto a second parallel platform, which ran at four miles per hour and had benches. Unfortunately the side walk was unreliable and kept breaking down. However when it did work, it was capable of carrying about 6,000 people at a time.


HAMBURGER
The hamburger, although not a new creation, first debuted in Chicago around the time of the World’s Columbian exposition. It is believed that it was a specialty of the horse-pulled lunch wagons which did not have inside seating. It was mainly patronized by the nightshift workers and they either took food away to eat elsewhere or ate it while standing on the streets. Whitaker J.( 2008)